We’ve just closed the Call for Papers for Codemotion Milan and we’re happy to announce that we’ve received more than 500 submissions coming from all around the world.

Currently, our Program Committee is evaluating the highest quality content that will be offered during the two days of the conference. But in the meantime… Let us present the first four Speakers for Codemotion Milan 2018!

We have been working really hard to choose the best possible speakers covering the hottest tech topics and today we have exciting news for you: we’re thrilled to announce the first 4 speakers joining Codemotion Milan 2018! So mark your calendar on November 29 – 30. 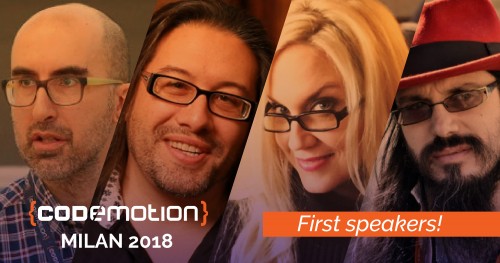 Here’s a bit of background on each of them:

An award-winning programmer, game designer and level designer whose work spans over 130 games, 108 of which have been published commercially. Romero is considered to be the “father of first person shooters” having led the design and contributed to the programming and audio design of the iconic and genre-defining games DOOM, Quake, Heretic and Hexen. He is considered to be among the world’s top game designers, and his products have won well over 100 awards.

Enrico Zimuel has been a software developer since 1996. He works in the R&D department of Rogue Wave Software (USA). He is a core developer of the open source projects Apigility, Expressive, and Zend Framework. He is a regular speaker of international web conferences and the author of the italian books “Sviluppare in PHP 7, “PHP Best Practices”, and “Javascript Best Practices”. Enrico Zimuel is also the co-founder of PHP User Group in Turin (Italy).

Mario is a senior software engineer at Red Hat working at the development of the core of Drools, the JBoss rule engine. He has a huge experience as Java developer having been involved in (and often leading) many enterprise level projects in several industries ranging from media companies to the financial sector. Among his interests there are also functional programming and Domain Specific Languages. He is also the co-author of “Java 8 in Action” published by Manning.

Did you enjoy this Sneak Peek?

Remember that this is just the beginning…  – there are more exciting news to come and interesting guests to look forward to. So you’d better secure your seat now to ensure you’ll catch these superstars speaking in Milan, this November.

We’re looking forward to seeing you in Milan!